WebEx is a program that runs on your browser allowing you to collaborate on-demand with other people.  The original WebEx program consisted of voice capabilities and content sharing. It allowed users to have a voice conversation while simultaneously sharing whatever was on their PC screen with the other users on the WebEx call.

Cisco bought WebEx in 2007 and has continued to enhance its capabilities, by adding key features, such as video, and by developing a whole suite of WebEx products. These products take the same basic capability of WebEx and specialize it for different kinds of online meetings – Webinars, Support, Training, etc.  Each of these meeting environments is a little different and works best with a customized set of tools to manage the online meeting.

Telepresence is the name given to the most life-like video conferencing implementation, which is the closest video conferencing implementation to “being there”.  The size of the video images are life-like and the audio quality is superb making it seem like you are sitting across the table from the people you are meeting with, even though they are in a different part of the world. 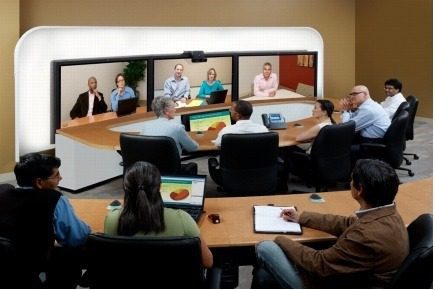 With two great products – WebEx and Telepresence, it was natural that people would soon ask for the two to be able to connect to each other.  Last year, Cisco introduced an update to their Telepresence solutions called WebEx Telepresence.

So now callers in a video conferencing enabled room can connect via video with remote participants who are using WebEx video.

WebEx Telepresence allows participants in WebEx meetings to connect via video with participants using Telepresence video conferencing endpoints (traditional H.323 and SIP videoconferencing).  Standard room based videoconferencing systems use H.323 or SIP as the protocol to connect rooms and control the call.  Traditional manufacturers, like Cisco and Polycom, use these protocols.  WebEx on the other hand, uses a proprietary protocol that is unable to directly communicate with traditional room systems.

What is the big deal with integrating one video technology with another?

Many videoconferencing industry insiders envision a future where video conferencing is ubiquitous. They believe that it will replace voice as the main real-time communications tool in the not too distant future.  However, one of the main roadblocks preventing this is interconnectivity between video systems.  The interconnectivity problem is that different technologies are using different protocols (languages) and until they either all speak the same language or translate the protocols between them seamlessly they can’t talk to each other.  I doubt that cell phones would have ever exploded 20 years ago, if users on the AT&T network couldn’t call Verizon customers or if Android phones could only call other Android phones.

To your average user, particularly those who use consumer video conferencing technologies like FaceTime and Skype, this seems like a straightforward task to accomplish.

“If I can FaceTime with Mom to wish her a Merry Christmas from the beach in Costa Rica, surely an enterprise boardroom should be able to make a video call to a PC based video desktop, particularly if they are both using Cisco products”

But we also know that Skype users can’t connect with FaceTime users – different protocols.  Those of us in the business know that getting all the video technologies to work together is easier said than done. It took Cisco almost four years since the acquisition of Tandberg in 2010 to get WebEx to talk to their Telepresence systems, resulting in the launch of WebEx Telepresence.

Why is it important?

I have many different clients who have been eagerly waiting for this capability. Some are educational institutions who want to leverage existing rooms, equipped with HD cameras, codecs and audio systems, to collaborate with research partners who could be located anywhere in the world and equipped only with a laptop.

Others are large enterprises that want to connect individual employees in remote locations with groups in central locations, who have access to video conferencing enabled boardrooms.

Sure there are many ways to tackle these requirements with different technologies, but when you have already made an investment in videoconferencing enabled rooms, infrastructure and WebEx, it makes a lot of sense to be able to connect them together.

WebEx has an excellent reputation for providing desktop web conferencing and superior audio conferencing capabilities. The addition of WebEx Telepresence means that these features can now be added to the high end video call experience. Unlimited audio users can also join a video call from anywhere in the world, be it from a phone or desktop computer. This new capability also means that iPad users can now join a video call on a Cisco system with high resolution video.

In order to implement WebEx Telepresence you will need to have the following infrastructure, at the right release levels:

Whether or not WebEx Telepresence makes sense for your organization will largely depend on what you are starting with or your current infrastructure.  If you already have Cisco video infrastructure and are using WebEx then it’s definitely worth looking at combining the two together to create an even more powerful collaboration environment.

Contact us if you have questions or would like assistance in connecting the WebEx and Telepresence systems.