Does Too Much Collaboration at Work Hurt Productivity?

Most Workers Struggle to Work Effectively.

According to the global architecture and design company, Gensler, who recently released their 2013 US Workplace Survey, most workers struggle to work effectively. A Toronto paper picked up the story with a headline stating, “Too much collaboration at work hurts productivity.” Does this mean that your organization should not strive for more collaboration?

No. It means that if you don’t strike the right balance, it can lead to unwanted and potentially negative results.

Malcolm Gladwell illustrates an example of the advertising agency TBWAChiatDay in his New Yorker article Designs for Working. He cites, “The firm had been engaged in a radical, and in some ways disastrous, experiment with a “nonterritorial” office: no one had a desk or any office equipment of his own. It was a scheme that courted failure by neglecting all the ways in which an office is a sort of neighbourhood.

By contrast, their new office is an almost perfect embodiment of Jacobsian principles of community. The agency is in a huge old warehouse, three stories high and the size of three football fields. It is informally known as Advertising City, and that’s what it is: a kind of artfully constructed urban neighbourhood. … Sprinkled throughout the building are meeting rooms and project areas and plenty of nooks where employees can closet themselves when they need to.”

An Effective Balance Between Order and Chaos is Required.

Steve Johnson, author of “Where Good Ideas Come From”, comments on the TBWAChiatDay first new office.

“By all accounts it was a colossal failure, precisely because it traded excessive order for excessive chaos … To work in an open office is to work exclusively in public, which it turns out to have just as many drawbacks as working entirely in your private lab.”

The Concept of Liquid Networks for Getting the Right Balance.

Johnson’s book introduces the concept of “Liquid Networks” as a metaphor for the right balance.  Liquid, as opposed to gaseous or solid.  A gaseous network is too volatile, the chaos referred to above, and a solid network is too ridged to sustain idea flow.

Johnson cites the work of Kevin Dunbar, McGill University psychologist indicates, “Even with all the advanced technology of a leading molecular biology lab, the most productive tool for generating good ideas remains a circle of humans at a table, talking shop.  The lab meeting creates an environment where new combinations can occur, where information can spill over from one project to another.  When you work alone in an office, peering into a microscope, your ideas can get trapped in place, stuck in your own initial biases.  The social flow of the group conversation turns that private solid into a liquid network.”

Dunbar’s generative conference room meetings remind us that the physical architecture of our work environments can have a transformative effect on the quality of our ideas.

“The quickest way to freeze a liquid network is to stuff people into private offices behind closed doors, which is one reason so many Web-era companies have designed their work environments around common spaces where casual mingling and interdepartmental chatter happens without any formal planning.”

Back to the Gladwell article …

“But when employees sit chained to their desks, quietly and industriously going about their business, an office is not functioning as it should. That’s because innovation—the heart of the knowledge economy—is fundamentally social. Ideas arise as much out of casual conversations as they do out of formal meetings. More precisely, as one study after another has demonstrated, the best ideas in any workplace arise out of casual contacts among different groups within the same company.  [Johnson’s Liquid Network] …

Innovation comes from the interactions of people at a comfortable distance from one another, neither too close nor too far.  …

The catch is that getting people in an office to bump into people from another department is not so easy as it looks.”

“… if there is a single maxim through [his] book’s arguments, it is that we are better served by connecting ideas than we are by protecting them. … Good ideas may not want to be free, but they do want to connect, fuse, recombine.  They want to reinvent themselves by crossing conceptual borders.  They want to complete each other as much as they want to compete.”

Or, simply put – to be more innovative you have to be more collaborative.  You need to put yourself in a position where you are bumping into, colliding with and spilling into other people’s perspectives and ideas.  Because doing so will trigger new thoughts and ideas that you wouldn’t explore in isolation. 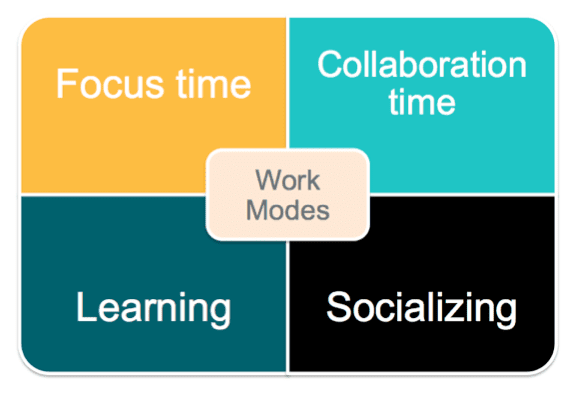 A Steelcase white paper, “How the workplace can improve collaboration”, June 2010, talks about a shift in the nature of work from more individual focused to more collaboration focused.

“Among the key findings was validation that a fundamental shift has occurred: most work today is done in collaboration with others versus individually. Moreover, rather than it being a segmented activity done in designated destinations such as a conference room, collaboration

is now almost constant and it threads throughout the entire workday. It occurs at desks, in hallways, in team spaces, on smart phones and via the Internet, and it’s often spontaneous and informal versus planned in advance. When the workspace is designed to fully support the new realities of collaboration, better learning, more innovation and faster decision-making can result.”

The white paper goes on to say that its study has revealed that people actually need 4 different modes of working:

The mix will depend on who you are and what you do.  The balance of the 4 modes will vary.

How do remote workers fit into this “Collaboration soup”?

Part 2, we explore whether being in the same physical space is critical to increasing collaboration.

If you would like further information on how to obtain the right balance of various working modes for your organization, please contact us.